Ok guys, I'm trying real hard to catch up a little at a time!! Thank for all of the comments on Part Two of the competition!!

I gave Trouper the day off on Sun after the competition. We had a light workout on Monday. Dani was here to watch and she was offered a great opportunity! I let her sit on Trouper!!! That's right! Until then, I had been the only person to ride him and Montana and Ernie had sat on him.

Trouper was a little unsure at first. His head was up and his ears were back, but he soon settled down. I lead him around for a couple minutes and then backed up to take this pic with my cell. 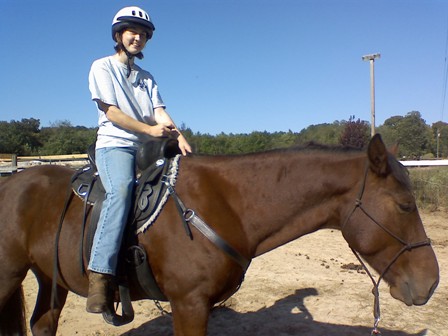 On Tues, Ernie decided to enter the picture again!  As I was riding Trouper around, Ernie started walking along the rail beside me. 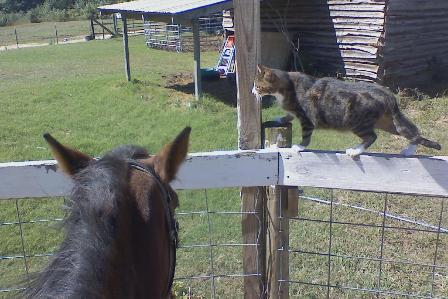 I was inspired by the jump at the competition over the weekend, so I decided to set up something to work Trouper over.

This next group of pics will be called the "Where's Ernie" pics because he is in them all, somewhere!

Here is Trouper checking out the jump and Ernie looking on from the rail top! 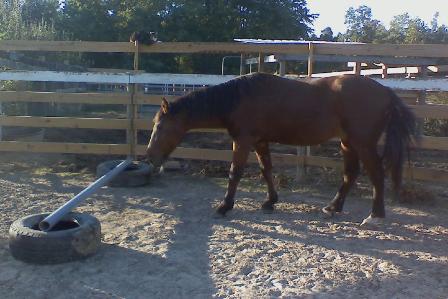 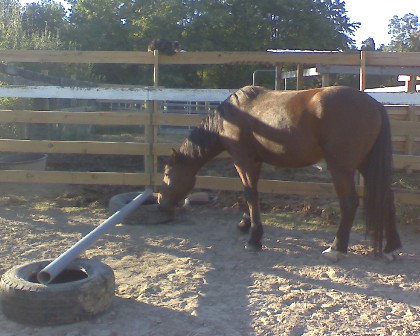 Now enters Gojo, our other rescue cat, to make his debut! 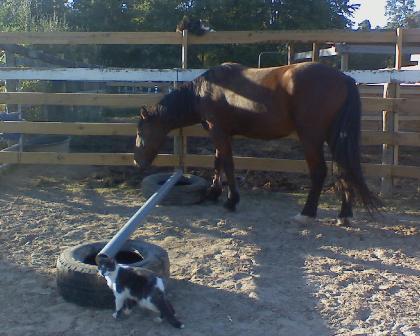 Trouper finds rest over the jump with Ernie looking on from in front of him. 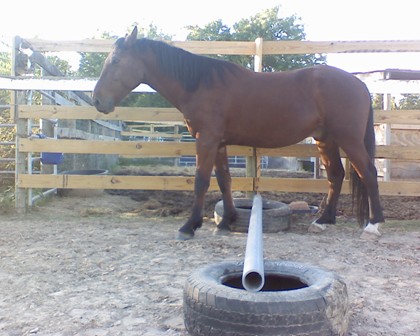 After walking and trotting over the jump for a while, I started cantering him over it for an actual "jump." Of course, Ernie was there for that as well!! :-) 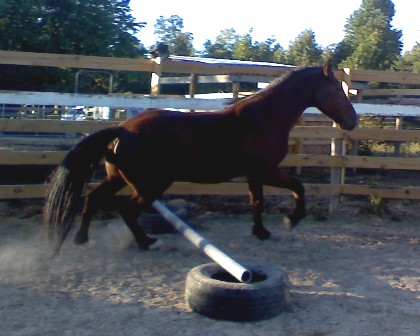 I will try to update on the rest of the week soon, but I want to update on how Trouper is feeling. We think his tummy might be upset from the new hay we got out of the field last week. He had been on round bale, with minimal sq bale daily, but when his last round bale ran out, we upped his sq bale intake about the same time that we picked up fresh hay out of the field. The vet says that it probably wasn't dried and cured enough for his system yet and to take him off of it for 2-3 days and slowly wean him back on it again. Also, to worm him with Quest Plus today and start him on probiotics tomorrow.

He seems much better today, but he still gets gassy after meals, so I hope this helps!

Reply Rosa Lee
12:25 PM on October 9, 2009
Wanted to let everyone know that Amber is officially in the "Idol's" Category.
So, her "In-Hand" and "Horse Course" will both be on Friday 23rd beginning at 8 AM .
If she makes it to the Idols Top 10 Finals, the Freestyle will be Sat at 4 PM.
You will NOT need tickets for any of the Idols competition, not even the Freestyle on saturday afternoon at 4 PM.

The Legends Top 10 starts at 7pm on Saturday, and you will need your tickets for that.

So, tho they will be free, this means that the seating during all of Amber's competition will be "first come-first serve". We will still try and sit near our Saturday night ticket seats, which is section 224, in case anyone wants to join us .

Just checking on you guys; I know you don't have much free time to post. I hope you and Trouper are both feeling well and doing great.

Just checking on you guys; I know you don't have much free time to post. I hope you and Trouper are both feeling well and doing great.


Thanks Virginia,
Trouper and I are doing fine. We are both sick of all of the rain and mud!!!
Our dear friend Glenn is not doing well and we are spending all of our time with him as he only has days left in this world.
I will try to update the blog soon, but Trouper and I haven't done much at all lately. I do have an exciting update from over a week ago, but other than that, not much. Weather and life hasn't allowed for much training time. Also, I'm planning a yard/bake/tack sale for Saturday to try to raise money to bring Trouper home.
Wish me luck to raise allot of money!!!
Amber

Reply Virginia
1:19 PM on October 15, 2009
Oh, I am so sorry to hear about your friend Glenn. Spend every moment you can with him, especially if time is precious. There's no pressure for an update - I just wanted to check to see if you guys were okay.

It's been raining like mad here, too, but will hopefully be gone for a while after today. Hope the same for you.

I wish you the very best luck at the Saturday sale - make sure you advertise it on the AL & GA Horselovers Board if you haven't already!

Reply Rosa lee
9:19 AM on October 20, 2009
My, how time flies!! The Extreme Mustang makeover is in 3 days!! Hopefully Amber can get in here and update us on Trouper's progress. I know it rained, and even sleeted, the day of her yardsale.
And, it has been muuuuudddddyyy around here from all the rain.
I'll see some of you in a couple days!!

I know you are too busy to post, but I wanted you to know we are thinking about you guys as you head to TN this weekend. You guys are going to do great, and I'll be anxiously waiting to hear how everything went. Also, please know that I'm praying with all my heart that Trouper will be coming home with you.........

Also, I hope things are okay with your friend Glenn. It seems like you have been through so much lately.

Hugs from a complete stranger (check out my blog sometime: http://pikeroadgirl.blogspot.com/),
Virginia

I know you are too busy to post, but I wanted you to know we are thinking about you guys as you head to TN this weekend. You guys are going to do great, and I'll be anxiously waiting to hear how everything went. Also, please know that I'm praying with all my heart that Trouper will be coming home with you.........

Also, I hope things are okay with your friend Glenn. It seems like you have been through so much lately.

Hugs from a complete stranger (check out my blog sometime: http://pikeroadgirl.blogspot.com/),
Virginia


Thanks, Virginia!! We could use the prayers right now!! Glenn passed away on Sat. Now Montana has Swine Flu and Jamie and I are getting it also. Tana is on Tamiflu and the doc called it in for Jamie and I today, so we will start on it as well.
I just hope we get through this weekend without any major disasters!! Poor Trouper has hardly been worked a hour in the last two weeks!!! Things have been crazy!
I will try to leave a quick post today to let everyone know (that doesn't follow the comments) what has been going one. I feel bad for not posting, but so many more important things have been going on.
Thanks for your prayers! We could really use them right now!!
Amber